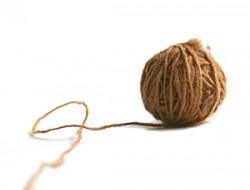 Anna Cowan gives the reader an exquisite ball of yarn that is "Untamed", we given the task to slowly unravel the strand of the story intertwined with memorable characters and something that will surprise the reader to the very end.

Katherine (Kit) Sutherland is a oddball of society. Willing to speak her mind to anyone from servant to duke. She's also built like a woman whose use to and no scared of hard work. When she learns that her sister is having an affair with the notorious Duke of Darlington, she goes to put a stop to it to save her sister's marriage.

Far from being insulted by Kit's warning to stay away. Darlington is intrigued by this brass woman. From her straight to the point way of speaking and speaking the harsh truth. A bargain is stuck between the two and a shocking attraction that will slowly change their lives making ripples along the way.

I really didn't know what to expect from Untamed- the most surprising aspect that everyone mentions is Darlington and his cross-dressing persona Lady Rose. That does that boy pull it off, most of the story does have him in drag, it never takes away from him being a man.Beautiful and refined he does come across at times a little needy, fragile while he's also a devious bastard that is willing to make people his chess pieces to get what he wants from sex with women and men he does not care. His cross dressing is just another move to get closer to his goal. The many masks Darlington or Jude wears are at times mean, evil and very tragic. Scarred from his childhood, Jude is like a feral cat who will bite the hand that feeds him then licking the wound he's inflected.
Jude needs for Kit to break him outta his shell, needs her to lance the wound on his soul. What he doesn't expect is how much is going to have to give and accept of himself and Kit.

Kit has her own childhood wounds and not just the broken nose and fingers that are visible. She's had to hold her family and the manor that is their home together by at times sheer will. Perhaps it's made her a tad narrow-minded in her outlook, but it doesn't make her blind to the pain her Mother and Brother -Tom she's had to hide from them. Along with her sister Lydia whose she has some guilt toward.
When she meets Jude who she stand toe to toe with in strength and size. She faced with a few of her own demons while trying to help another with their own.

Cowan plays on gender roles between Jude and Kit. Kit comes across as the "Prince" while still being very much a strong woman, and Jude of course the "Princess" in need of some saving. The conflicts between the two wraps the reader up in a warm blanket, engrossed so deeply with their interactions that the pages fly. That to was the trouble. At times I didn't agree with neither of their behaviors and actions. They circle, circle each other and attack one another or be so flamboyant that it wasn't heard of at the time without some stronger censure. Although on the flip side I was very entertained.

The main trouble I had overall with the book was reader having to assume. Assume the actions, assume to the why, assume. I hate to assume anything. It feels like the puzzle pieces just don't just fit right.
And like a play on the stage or pieces on the board, all the side characters enrich the story, even when we don't agree with them or their actions, it made them human, imperfect and beautiful.

This is going to be one of those stories that will haunt me for sometime to come, a haunting story with something original and unique as single piece of string.

View all my reviews

Popular posts from this blog

The Waking Land by Callie Bates
My rating: 2 of 5 stars

This was one of those books that has you rooting for the team and not the players/characters. I found the world building very engaging with the fables and legends a strong foundation.

While the world building was it's true strength everything else felt lacking. I never cared for any of the characters are their building relationships. They all felt just like pawn pieces moving across the board. and never fleshed out for me to care about them one way or another. I hope the author re-visits this world someday as I am curious about some characters that didn't get enough screen
time .

The Hanging Girl by Eileen Cook
My rating: 5 of 5 stars

The mystery is on a slow boil as your introduced to Skye whose life is stuck in a dead-end
then she makes a deal, a easy deal that would get her money and a new life. That is until the deal ends up with someone dead and Skye stuck in the middle and running out of time to find a murderer.
As everything slowly unravels for Skye, who you feel a deep empathy for, even if she made a really crappy choice. I always hoped she be okay in the end. Cook does put the reader through an emotional ringer as everything starts to add and and then! -She hits you again with another shocker that left me guessing if it solved everything or just another secret.

I can't say enough great things about this book- only to read it for yourself!

Mask of Shadows by Linsey Miller
My rating: 2 of 5 stars

Mask of Shadows had alot going for it, peace trying to grow in a war torn land, A Queen trying to hold the ragged strings of peace with her band of assassins to keep the unsettling silence. Here is where Sal grows, their home wiped from the face of the earth, victim of dark cruel and uncontrollable magic. Sal finds their chance to work with the Queen as one of her assassins, a chance to get revenge for their family and home and get justice once and for all. As Sal plays the game and walks through the court, they learn more that makes this so called peace nothing more then a magical illusion.

I was curious in how Miller would write a gender fluid character and perhaps one of if not the best part of the overall book was the way Sal was shown as being gender fluid and great understanding and beautiful storytelling weaving that it just flowed. Sal as a character was interesting as they slowly uncover clues but use their…
Keep reading

Find Me Also At